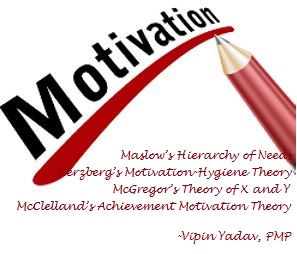 The phrase Motivation Theory is concerned with the processes that depict why and how human behavior is activated and directed. It is regarded as one of the most important areas of study in the field of organizational behavior. There are several motivation theories; however none of them are universally accepted.  No single theory can account for all aspects of motivation, but each of the major approaches contributes something to our understanding of motivation.  Here is an bird-view of the most admired motivational theories.

Abraham Maslow’s message is that people do not work for security or money. They work to contribute and to use their skills. Maslow calls this ‘self-actualization’. He created a pyramid to show how people are motivated and said that one cannot ascend to the next level until the levels below are fulfilled.

One of the most widely mentioned theories of motivation is the Hierarchy of Needs theory by psychologist Abraham Maslow. Maslow saw human needs in the form of a hierarchy, ascending from the lowest to the highest, and he concluded that when one set of needs is satisfied, this kind of need ceases to be a motivator.  Needs can be categorized as: 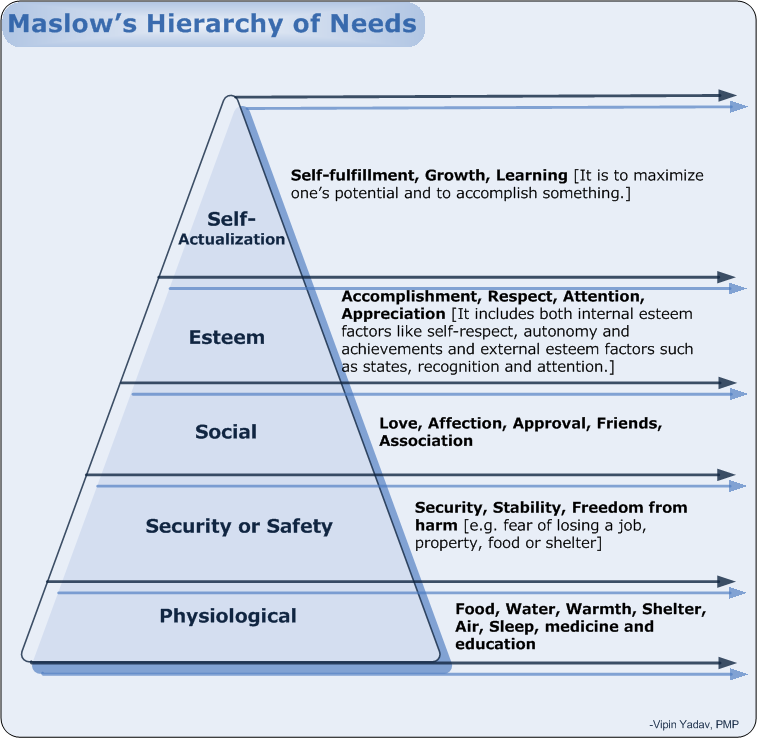 Physiological: These are important needs for sustaining the human life. Food, water, warmth, shelter, sleep, medicine and education are the basic physiological needs which fall in the primary list of need satisfaction. Maslow believed that until these needs were satisfied to a degree to maintain life, no other motivating factors can work.

Security or Safety: These are the needs to be free of physical danger and of the fear of losing a job, property, food or shelter. It also includes protection against any emotional harm.

Social:  Since people are social beings, they need to belong and be accepted by others. People try to satisfy their need for affection, acceptance and friendship.

Esteem: According to Maslow, once people begin to satisfy their need to belong, they tend to want to be held in esteem both by themselves and by others. This kind of need produces such satisfaction as power, prestige status and self-confidence. It includes both internal esteem factors like self-respect, autonomy and achievements and external esteem factors such as states, recognition and attention.

Self-Actualization: Maslow regards this as the highest need in his hierarchy. It is the drive to become what one is capable of becoming; it includes growth, achieving one’s potential and self-fulfillment. It is to maximize one’s potential and to accomplish something.

Preferably, the two approaches, hygiene and motivation, must be carried out simultaneously. Treat people so they obtain a minimum of dissatisfaction. Use people so they achieve, get recognition, grow and advance in their careers. Based on Maslow's Hierarchy, Herzberg theorized that the factors that motivate the worker or are likely to satisfy their needs, lead to positive job attitudes.

McGregor’s Theory of X and Y

Douglas McGregor states that (his book ‘The Human side of Enterprise’) people inside an organization can be managed in two ways. The first is which falls under the category negative::X and the other one is positive::Y.

Under the assumptions of theory X 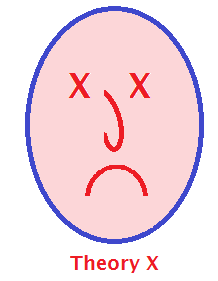 ·  Employees inherently do not like work and whenever possible, will attempt to avoid it.
·   Because employees dislike work, they have to be forced, coerced or   threatened with punishment to achieve goals.

Under the assumptions of theory Y

People who have a high need for power are inclined towards influence and control.   Power seekers want power either to control other people (for their own goals) or to achieve higher goals (for the greater good). They seek neither recognition nor approval from others, only agreement and compliance.

In the second category are the people who are social in nature. Affiliation seekers look for harmonious relationships with other people. They will thus tend to conform and shy away from standing out. The seek approval rather than recognition. They are driven by love and faith. They like to build a friendly environment around themselves. Social recognition and affiliation with others provides them motivation.

People in the third area are driven by the challenge of success and the fear of failure. Their need for achievement is moderate and they set for themselves moderately difficult tasks. They are analytical in nature and take calculated risks. Such people are motivated to perform when they see at least some chances of success.  Achievers seek to excel and appreciate frequent recognition of how well they are doing. They will avoid low risk activities that have no chance of gain. They also will avoid high risks where there is a significant chance of failure.

McClelland observed that with the advancement in hierarchy the need for power and achievement increased rather than Affiliation. He also observed that people who were at the top, later ceased to be motivated by this drives.

Almost all human beings have the same types of needs. Just remember that people experience these needs at different times and to different degrees. In addition, other cultures provide differing contexts for the satisfaction of these needs. As a Project manager it is vital to be prepared to deal with these facts in order to create and maintain a satisfied and productive workforce.